One-third of the world population lives in countries that move away from liberal democracy. Apparently, liberal self-governance is under stress. Democracy’s unexpected fragility has fueled scholarly interest in the regime preferences of ordinary citizens. Are democracy’s attitudinal foundations eroding? Do citizens turn away from liberal democracy and towards illiberal forms of governing? 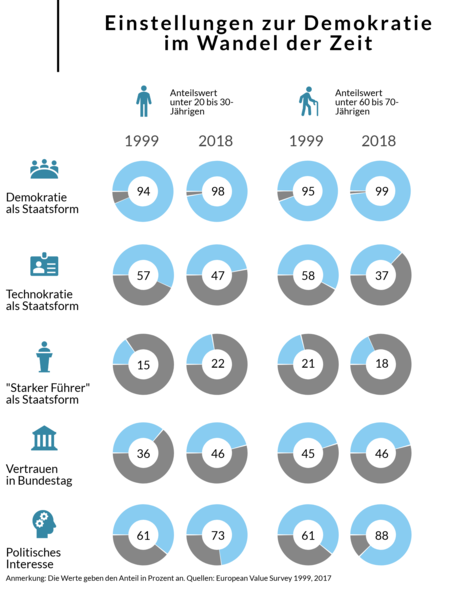 We investigate these questions in a series of papers that are currently under review. Notably, we do not find consistent evidence for the erosion of democratic support in any of our studies. There is no coherent pattern of declining democratic support neither overtime nor across generations. With respect to Germany, we have summarized some of our findings [German] for a general audience for the blog of the German Political Science Association.

Almost universally, both young and older citizens want to live in a democracy and they endorse democratic self-governance as the preferred system of governing. In the same vein, there is no stark increase in support for non-democratic alternatives to governing either. However, while citizens continue to support democracy in the abstract they are not as supportive of how democracy’s central institutions work in practice. A final, notable result of our research is the remarkable re-politicization that has occurred over the past two decades.

Altogether, however, the overall picture is that the attitudinal foundations of democracy remain intact. Yet, these findings do not suggest that democracy is safe. Citizen attitudes towards democracy are but one indicator of a healthy democracy. What is more: Attitudes are not enough. What also matters is that citizens translate their attitudes into political practice when it really matters.