Beginning this week, I will be Professor of Digitalization and Political Behavior at LMU Munich. I am Juniorprofessor on Tenure Track and motivated to contribute to an already excellent political science department.

The LMU political science department is named in honor of Hans and Sophie Scholl. In a time when many at the university had adapted to the totalitarian Nazi regime or actively promoted the national-socialist ideology, Hans and Sophie Scholl distributed Anti-nazi-leaflets in the university halls. When the housekeeper discovered their activities, they were imprisoned and sentenced to death by Guillotine. You can find the leaflets in German language here. Working at the Geschwister-Scholl-Institute, I want to take their examples as a reminder of the ideals that we should aspire to as political scientists and democracy researchers.

Moving to Munich for this new position is kind of a dream come true. An exciting time lies ahead and I am looking forward to meeting all the new colleagues and students. And to discover the Alps.

Why do many populist movements manage to assemble coalitions of societal groups that cut across ideological and socio-economic divides? In a new Registered Report, published in German Political Science Quarterly, Nils Steiner, Christian Schimpf and I argue: All groups that constitute the populist coalition share a feeling of lacking societal recognition – but for very different reasons.

Nils Steiner does an excellent job to summarize the paper in this twitter thread:

A prominent but underspecified explanation for the rise of populism points to individuals’ feelings of being “left behind” by the development of society. At its core lies the claim that support for populism is driven by the feeling of lacking the societal recognition one deserves. Our contribution builds on the insight that individuals can feel they lack recognition in different ways and for different reasons. We argue that—because of this multifaceted character—the common perception of being neglected by society unites otherwise heterogeneous segments of the population in their support for populism. Relying on data from the German Longitudinal Election Study (GLES) Pre-Election Cross-Section 2021, our preregistered study investigated the multiple roots of populist attitudes in feelings of lacking societal recognition in two steps. First, our results indicate that, from rural residents to sociocultural conservatives or low-income citizens, seemingly unrelated segments of society harbor feelings of lacking recognition, but for distinct reasons. Second, as anticipated, each of the distinct feelings of lacking recognition are associated with populist attitudes. These findings underscore the relevance of seemingly unpolitical factors that are deeply ingrained in the human psyche for understanding current populist sentiment. Overall, by integrating previously disparate perspectives on the rise of populism, the study offers a novel conceptualization of “feeling left behind” and explains how populism can give rise to unusual alliances that cut across traditional cleavages.

Registered Reports chart a clear, reliable path to publication. The structured process reduces uncertainties as scholars know before data collection whether the efforts will result in a research publication. Registered Reports are therefore particularly appealing for Early Career Researchers who will be evaluated based on their publication track records. Moreover, the clear and reliable path to publication may encourage researchers at all career stages to take risks in ambitious projects.

The article format promises advantages for the academic community as a whole because it is designed to promote the credibility of published research findings. Editorial decisions on Registered Reports are based on the merits of the research question and design, irrespective of the empirical results. In consequence, Registered Reports should minimize publication bias (overrepresenting clean, positive or spectacular results) and reporting bias (overrepresenting findings that match researcher preferences) while allowing the flexibility to conduct unregistered analyses and report serendipitous findings.

Alexander Bor and colleagues have published a valuable study on prejudice of vaccinated people against the unvaccinated and vice versa. Deutschlandfunk asked for my opinion on this study and I said a few words. Of course, as always, I talked about open data, pre-registration and democracy. 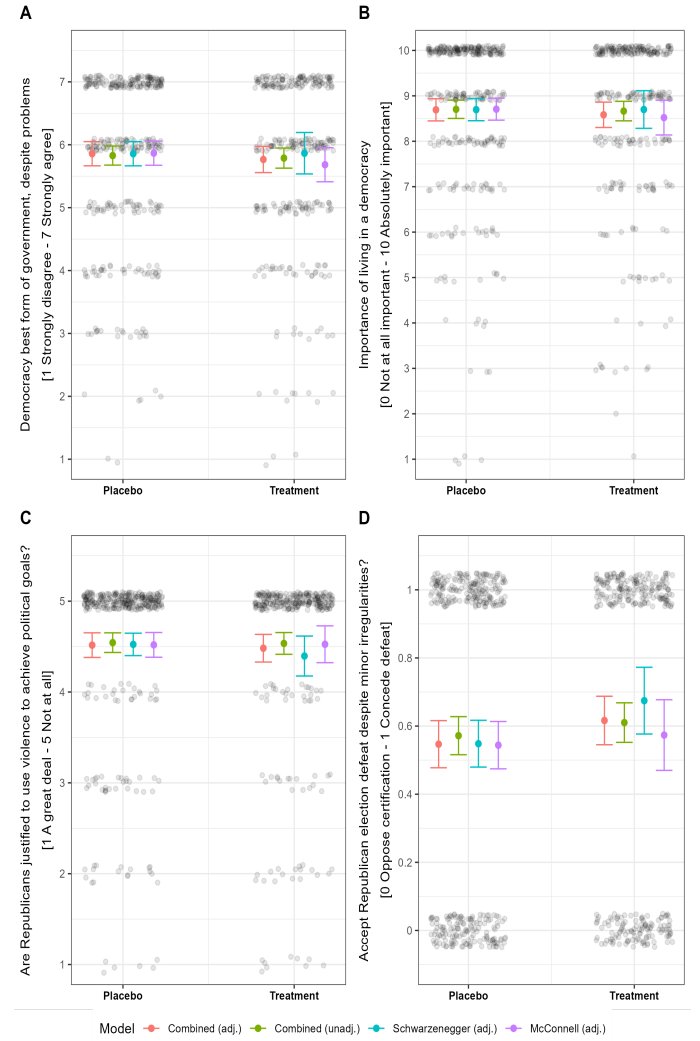 A few days after the insurrection at the US Capitol on January 6th, 2020, former governor Arnold Schwarzenegger published a video message on democracy. With reference to his experience of democratic breakdown in his native Austria, Schwarzenegger made an emotional appeal for democracy. At the time, this message was considered well crafted and highly persuasive. A best practice case for making the case for democracy. In a survey experiment, we put the persuasiveness of this video message to an empirical test (along with another prominent intervention, a speech by Mitch McConnell on the peaceful transfer of power). We find no effects of attitude change through exposure to any of these videos among Trump voters.

What can politicians, journalists and other actors with communicative power do to strengthen citizen commitment to democracy? In a new study, Florian Foos (LSE) and I propose „democratic persuasion“ as an actionable intervention to bolster the societal foundations of democracy. We tested the efficacy of democratic persuasion in a field experiment that we conducted in collaboration with several members of German parliaments from various democratic parties. Our results are promising. Here is the pre-print:

Political entrepreneurs put liberal democracy under pressure by fueling concerns and exploiting citizens’ fragile commitment to this system of government. As difficult trade-offs are made apparent in the context of the Covid-19 pandemic, we investigate one communicative strategy that political elites who want to defend the principles and practices of self-governance in pluralist societies can pursue. We propose “democratic persuasion” as an actionable, theory-driven intervention to increase the resilience of citizens‘ commitment to liberal democracy. „Democratic persuasion“ requires that legislators actively make the case for democracy and discuss inherent trade-offs while engaging existing doubts and misperceptions. We invited citizens on facebook to attend one of sixteen Zoom townhalls organized in collaboration with members of the German parliament. Each legislator conducted two town halls and we randomly assigned the townhall, where they employed „democratic persuasion“. Results suggest that “democratic persuasion” increases support for liberal democracy among citizens in the short term.

The Journal of Deliberative Democracy has published a new study [Open Access], spearheaded by Lea Gärtner, in collaboration with Harald Schoen and myself: Who Talks and Who Listens? How Political Involvement Influences the Potential for Democratic Deliberation in Everyday Political Talk

Why do many populist movements manage to assemble coalitions of societal groups that cut across ideological and socio-economic divides? In a new Registered Report that has now received in-principle acceptance, Nils Steiner, Christian Schimpf and myself argue: All of the groups that constitute the populist coalition share a feeling of lacking societal recognition – but for very different reasons.

It is a curious aspect of today’s populism that its ideological core considers society as a homogenous entity but at the same time populist movements are particularly successful in uniting segments of the population that are very different from each other.

Our attempt at explaining this fact builds on the popular thesis that supporters of populist parties feel “left behind”, but we try to put it on more solid conceptual footing. We propose a more specific, inherently multidimensional conceptualization of feeling “left behind” as the perception of being denied the societal recognition one deserves. Our synthesis of literature from philosophy, psychology and the social sciences characterizes societal recognition as a fundamental human desire whose thwarting leads to self-defensive reactions with political implications such as populist attitudes. And because there are many pathways to the perception of lacking recognition, feeling “left behind” may unite different groups who have been characterized as supporters of populism: people in routine jobs who perceive a lack recognition for the work they do (Sandel, 2021), conservatives who feel alienated by cultural changes in society (Norris/Inglehart) or those living in “left behind” rural places (Broz, Frieden and Weymouth, 2021; Harteveld et al., 2021).

Besides the theoretical argument, what I personally like about this paper is the format: We test this proposition of lacking societal recognition as the common cause of populist sentiments in diverse segments of society in a Registered Report format as part of the GLES OpenScience challenge for the German Political Science Quarterly. This means that our study underwent the ordinary peer review process – but before data was even available. It was judged solely on theoretical merits and the appropriateness of the research design — not whether we generated spectacular, surprising or clean findings.

We share a pre-print of the Stage 1 manuscript on SocArxiv. We share empirical results based on our pre-registered analysis pipeline here.

Happy to share a pre-print of one of the most fascinating projects I have been involved in.

With Nate Breznau and Eike Rinke we have coordinated the research efforts of 163 social scientists who simultaneously be independently investigated the same research question with the same data. The result of that exercise reveals a previously hidden universe of scientific uncertainty that changes how interpret and approach scientific inquiry more. More info below.

This study explores how analytical choices of researchers affect the reliability of scientific findings. Current lack-of-reliability discussions focus on systematic biases. We broaden the lens to include idiosyncratic decisions in data analysis that lead researchers to diverging results and conclusions. We coordinated and observed decisions among 73 research-teams as they independently tested the same hypothesis using the same data. Results show that in this typical secondary data research situation, the universe of pathways from data to results is so vast that each analysis was unique in some way. Teams reported divergent findings with contradictory substantive implications that could not be explained by differences in researchers’ expertise, prior beliefs, and expectations. This calls for greater humility and clarity in presentation of scientific findings. Idiosyncratic variation may also be a cause for why many hypotheses remain highly contested, particularly in large-scale social and behavioral research.

I have benefitted from others sharing their syllabi online, so I want to share mine as well. Syllabi on Democracy, Causal Inference, Electoral Behavior, and some random slides I use for teaching 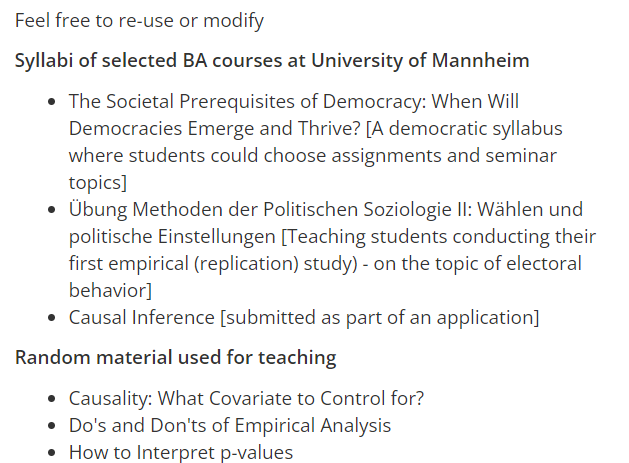 Alexander Wuttke is Professor of  Digitalization and Political Behavior at LMU Munich. His research focuses on challenges to liberal democracy from the perspective of ordinary citizens.